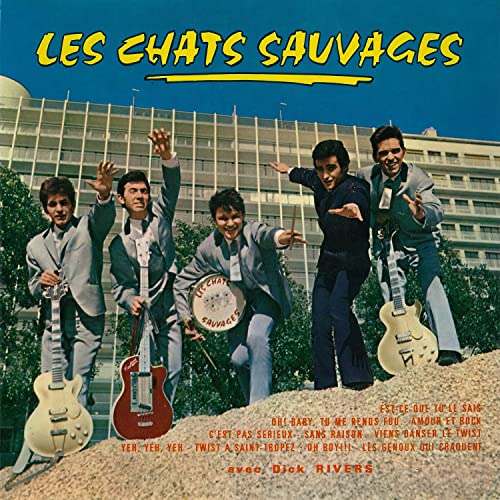 Les Chats Sauvages (The Wild Cats), led by singer Dick Rivers, were among the first rock n roll bands in France, along with their rivals Les Chaussettes Noires (The Black Socks) (Eddy Mitchell). They were signed to Pathé-Marconi.

They were huge fans of the English band The Shadows. After meeting them at a radio show (Musicorama), they decided to buy the same equipment as The Shadows. They purchased their first two ivory Fender Stratocaster guitars, a Precision Bass Sunburst and a Gibson Hummingbird in a shop in Antwerp, during a Belgian tour.

Dick Rivers left the band in the summer of 1962, later replaced by Mike Shannon.

Between the departure of Dick Rivers and the arrival of Mike Shannon, as there were 40 concerts still planned on the agenda, vocals were performed by Thierry Thibault. The last leg of the tour was a huge success despite the cancellation of a gig in Châtelet (BE) on September 9, 1962 where the band was replaced at the very last minute by Richard Anthony.

The band was first managed by Jean-Claude Camus, followed by Ticky Holgado.

Les Chats Sauvages broke up in 1964. The band was briefly reformed in 1982 to record an album celebrating their 20 years, with a one-year delay.