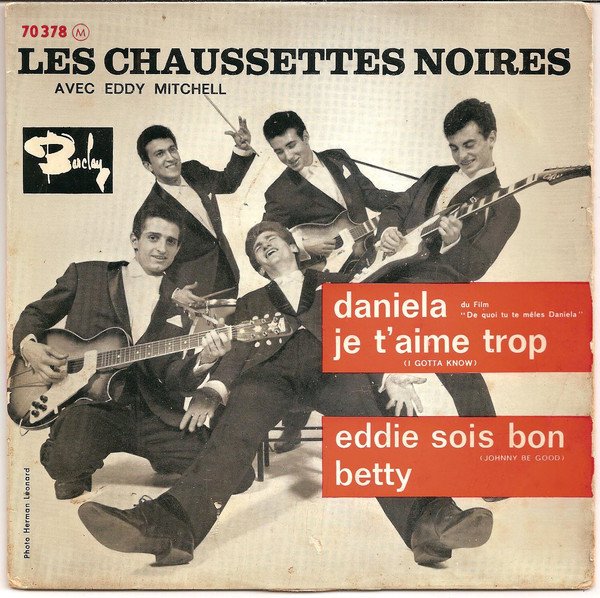 Co-founded by Claude Moine (Eddy Mitchell) and Aldo Martinez, they were the first professional rock n roll band in France. Originally named Eddy Dane et les Danners, then Five Rocks / Cinq Rocks, they were compared by Henri Marchal to wild cats (Chats Sauvages) when performing during an audition an adaptation of Gene Vincent’s Wild Cat, a phrase which would later become the name of their main rival, Les Chats Sauvages. Marchal had joined Pathé-Marconi, producer of Dick Rivers’s band.

Their first single “Tu parles trop” (You Speak Too Much) was released in January 1961. The band didn’t choose their own name. Actually they heard it for the first time when their single was played on Europe n°1. Without telling the musicians, their label had signed a deal with the sock brand Stemm, hence their name, a blatant “product placement”.

They appeared at the first International Rock N Roll Festival on February 24, 1961 at the Palais des Sports in Paris, headlined by Johnny Hallyday.

Their slow Daniela sold 800,000 copies, their best selling record ever. In the summer of 1961, they were featured in the movie “Les Parisiennes”. Koko, soon to become famous as Claude François, taught them their dance moves.

On September 1963, they headlined the Châtelet Festival in Belgium.

Eddy Mitchell gradually developed a solo career before finally leaving the band on December 31, 1963 (a decision he took in May 1963). The band stopped recording at the end of 1964. Aldo Martinez, the original co-founder, joined Eddy Mitchell’s backing band in September 1964.